The Meaning Of Koi

Among the reasons behind the koi fish’s popularity is the rich symbolisms associated with it and its place in myths and legends.

In fact, the attributes that the koi fishes symbolize is the main reason why it can rake up very high prices among companies, especially those owned by Asian businessmen.

That said, in today’s article I will talk about the meaning of koi and myth.

After all, knowing the koi’s place in the Asian imagination will help you understand how the koi managed to move from being a food source to being one of the most sought after and most expensive pets.

Meaning Of Koi Fish And Myth: The Koi’s Place In Legends

Before we start talking about the meaning of the graceful koi fish, let’s first talk about the most famous legend which features these well-loved fishes.

As you probably know already, the koi dates back to centuries ago in China and Japan.

Originally bred as food source, the koi was eventually bred for its aesthetic value and at one point was deemed worthy of being given as a gift to a Japanese emperor.

Since then, the koi’s popularity continued to rise and it gained a place in ancient symbolism.

One legend that greatly contributed to koi fish meaning and myth is that pertaining to the waterfall.

The legend tells the story of a koi swimming up a waterfall on the Yellow River.

Many carps attempt to achieve this feat for one reason.

According to the story, the koi which successfully swims up the falls and bravely passes through the Dragon’s Gate at the top of the waterfalls will be greatly rewarded.

The reward? It will be transformed into a powerful dragon.

This legend has helped shaped the positive imagery associated with koi fish meaning and myth. 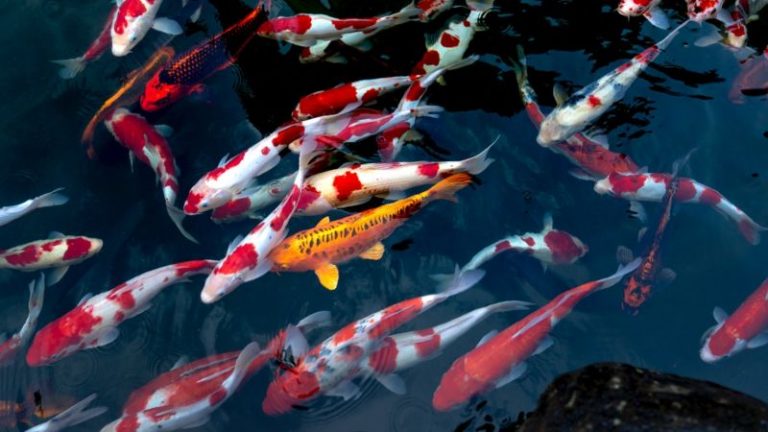 Meaning Of Koi Fish And Myth: The Koi’s Symbolism

The koi has a colorful history and an even more colorful place in the Asian consciousness.

Here are the most common meanings associated with the beautiful koi fish.

In general, the koi fish is associated with positive traits and attributes.

Among the traits it symbolizes are: good fortune, success, prosperity, longevity, courage, ambition, and perseverance.

Aside from the traits generally associated to koi fishes, there are meanings associated with particular koi colors.

Some of these color-specific meanings are as follows:

In addition to these, the koi also has a place in Feng Shui where it is associated with the yin-yang symbol.

Thus, the koi is often associated with harmony.

Now that you know the meanings associated with koi, I’m sure you will better appreciate these colorful fishes.

Imagine: not only will these fishes give your home a nice, colorful touch, they will also bring you luck and good fortune.

New Koi Fish to add to your Pond? Maybe a Butterfly Koi? What about a Kohaku Koi?

What other breeds are out there? Check this article out then: Discovering The Different Varieties Of Koi Fish

Don’t have a Pond? How about Building your Own? Here are the most important things to remember when building a koi pond.